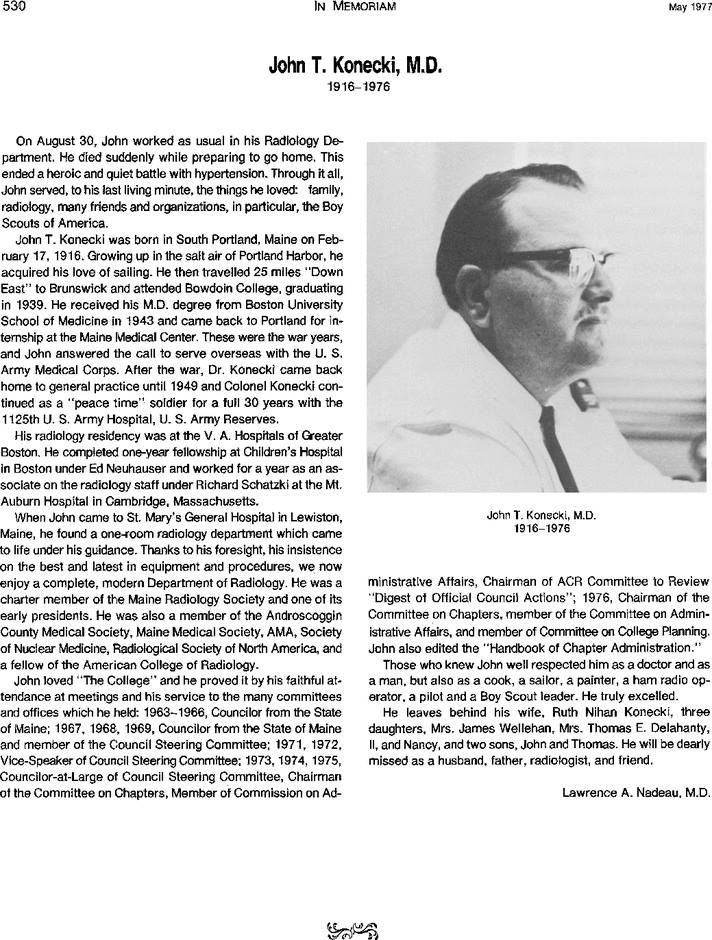 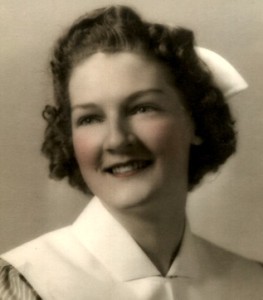 FALMOUTH – Ruth Nihan Konecki, 93, of Field Road, Falmouth, widow of Dr. John T. Konecki, retired nurse, and beloved family matriarch known as “Super Nana,” died at home on March 29, 2014 in the company of her family and following a lengthy illness.

The only daughter of George and Annie Katherine (Rogers) Nihan, Ruth was born on August 15, 1920 in Lynn, Mass. She spent her younger years in the company of her six brothers, and enjoyed summers on Lake Attitash in Amesbury. A 1938 graduate of Lynn English High School, Ruth earned her nursing diploma at Lynn Hospital. She later worked as an emergency room nurse at the former Haynes Memorial Hospital, where she met Dr. Konecki of South Portland. Knowing that Ruth hailed from the Boston area, he asked her to accompany him on an ambulance run to provide street directions to avoid his getting lost. They got lost anyway, but found each other and were married in Boston on Feb. 17, 1943.

When her husband joined the Army Medical Corps during World War II, Ruth accompanied him to New Orleans during his training. She returned to Lynn when he was assigned to the European Theater. After the war they moved to Portland where Dr. Konecki maintained a medical office on Washington Avenue. The couple returned to Lynn when he began the study of radiology. In 1954 they moved to Auburn, Maine when Dr. Konecki became Chief of Radiology at St. Mary’s Hospital in Lewiston. He died in 1976. Ruth moved to Lewiston in 1985, and then to Falmouth in 1995 where she lived with her daughter, Nancy and family.

Ruth was a sports fan and enjoyed playing tennis and was an especially devoted fan of the Boston Red Sox and particularly took great delight in their three championship years. Although she was not an avid traveler, she experienced memorable trips to Europe, the Caribbean, Mexico and the Hawaiian islands. She loved dogs and cats and her daughters’ horses, and enjoyed feeding and watching birds. She also delighted in seeing the many deer, turkeys and foxes in her Field Road neighborhood.

Ruth formerly served as a Eucharistic minister at St. Philip’s Church in Auburn, and more recently was a communicant of Holy Martyrs Church in Falmouth.
In addition to her parents, Ruth was predeceased by her six brothers, George, Robert, her twin Roger, William, Leonard, and John ‘Jack’ Nihan. A son and daughter-in-law, Dr. John T. Konecki, Jr. and Susan Skinner, also predeceased her. 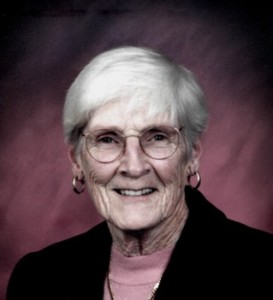 At Ruth’s request, there will be no visiting hours. Funeral services will be held Saturday, May 24, 11 a.m. at St. Philip’s Church in Auburn. Condolences, donations, and a video tribute may be accessed online at www.albert-burpee.com.

In lieu of flowers, donations are requested for:
Hospice of Southern Maine
180 U.S. Route One
Scarborough, Maine 04074

Jenny: Nana, this is my good friend Kathleen.
Nana: Ohh, that’s a good strong Irish name, are you Irish?
Kathleen: Me? No, haha, I’m Chinese
Nana: Ohh! Have you met Chinese Mark?

Nana: “What’d you have for lunch?”
MT: “I got some sushi. I’ve been eating a lot of it lately.”
Nana: “Can’t you afford some real food? Oh dear, let me get you some money.”

MT: [lists all the John Thomases and Thomas Johns]
Nana: “…and I got one that’s somethin’ to do with a turtle. And a Russian. Svet Svet Svet. It’s SVETlana.”

Nana, sitting in the dark: “That’s Chooch and Tom’s house. It’s lit up like Broadway!”

Nana: “Who can I sue? I want to be [Kristian’s] first customer. I’m serious.”

Nana: “Obama got a home run in the second inning!” 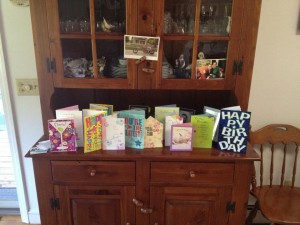 Nana on turning 93: “I can’t believe how many cards and flowers I got. I thought all my friends were dead!”

Nana: “Does Ashley have to go to a school tomorrow?”
JT: “She’s not sure yet, they call her in the morning.”
Nana: “What kind of a job is that? How can you plan your day? We need to go to breakfast!”

Nana: “What in the heck is a dot com anyway? All I hear is dot com, dot com, it’s at the end of everything!”

Nana: “I never told your mother that. You can tell her after I’m dead”

Nana: “Go in your room and shut the door tight and no one will bother you. Just open a window and don’t put your head under the covers. One of these days you’re gonna suffocate. And only open the window with the screen but shut the shade there’s all kinds of crazies out there.”

Nana: Give Johnny this sandwich.
NT: I’ll let him know he can have it if he wants it.
Nana: …make him want it. Nana combats fighting rabbits, squirrels, and birds lower in her hierarchy than the Eastern Bluebird.

Nana to Chooch regarding her upcoming cruise…
Nana: “You heard what happened to that cruise ship in Italy and you’re still goin’? I’d rather be hung.”